Early this morning I went to Haystacks Rock in the Firth of Forth to recce it as a potential marine testing site for the RockPod and my equipment prior to going to Rockall. It meant a very early start (0500hrs) in order to meet the boat at Granton Harbour, and although the tail end of a hurricane was forecast, the sea was flat and there was little wind. It was however raining pretty hard. 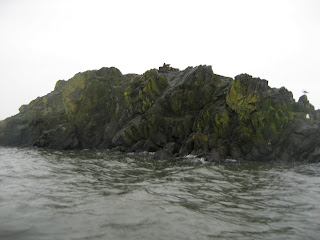 It took about 40 minutes to motor across the Firth to Inchcolm Island and then a quick RIB ride onto the rock. Landing was easy from the sloping western side, but having circumnavigated the rock prior to landing I noted that the eastern flank was near vertical, which should provide some experience of a scramble/climbing landing and somewhere to practice hauling the gear up from a boat.

Haystacks is similar in size at high tide (30m x 20m) to Rockall (25m x 22m), but is only 8 metres above sea level as opposed to 19.2 metres for Rockall. I think the extra space provided by Haystacks being much more level will be good for testing as it will enable me to spread stuff out a bit and get used to rigging before having to do it in a more restricted space. 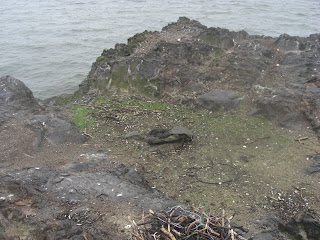 There are some signs of nesting, although the four nests I could identify had all been vacated, and the build-up of guano means that there are a few level areas which could be suitable locations for the RockPod. One in particular I measured to be about 9‘ x 5‘6’’ (narrowing to 3‘2’’) and is right above the cliff, so this is the most likely candidate for mimicking Hall’s Ledge (11’ x 4’). There were also some signs of previous occupation, perhaps by “birdy people” to quote the skipper, in the form of a cairn and a concrete base and clasp, probably for an aerial. The latter is raised and suitably close to the level area that it could act as the summit of Rockall with its defunct navigation light, and would be a suitable spot for a wind generator. 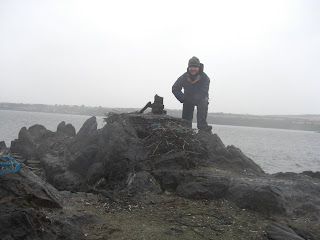 In all, I spent just over an hour on Haystacks and I think it was worth the trip, getting wet and the early start. Unless something better comes along I’ll be using the rock as a testing ground at some point in the future.
Posted by Nick at 15:03 No comments:

It’s been a great few weeks working towards this goal, which seems sometimes to be almost impossible to achieve. I have been reminded though, by both the recent failure of a Belgian team to land on Rockall and by unseasonable storms in July, that the weather may well be my biggest hurdle and no amount of preparation will give me control of this.

In terms of organising equipment, I have agreed with Norco that they will polish the ‘RockPod’ design and manufacture the end product. They have very kindly agreed to provide the tooling for free; and on Friday I was approached by a potential financial sponsor with the specific aim of paying for the manufacture!

From a recommendation from Norco, Lewmar have come on board and have promised to provide me with their hatches for free which will give me secure access and observation to and from the Pod. Furthermore, I approached Ampair for some advice and costings for a wind generator to provide me with power on Rockall. They have been amazingly helpful, calculating my power requirements and donating generation equipment to the expedition. Ampair have also said that they will use their industry contacts to try and obtain sponsorship from manufacturers of the other power system components I will require.

Also, this week, I have agreed a window for the expedition in 2011 with the Captain and owner of the Elinca which is a boat which has assisted several previous Rockall landing attempts, both successful and otherwise. They are without a doubt the most experienced in this particular area of the Atlantic and therefore I am very glad that they are involved.

Finally, this coming Wednesday, I am going on a recce trip to some rocks in the Firth of Forth which I hope will make a suitable marine testing ground for the pod and all the equipment in the final months before the expedition; I am very grateful to Bill Simpson who is kindly taking me there (and hopefully back!) for no cost. I will post more details of this recce after the fact.
Posted by Nick at 10:53 1 comment: