So, day three in Harris and I was all set to depart this morning for Rockall. I started the day with a live interview for Good Morning Scotland, which was thankfully brief as it was my first live interview, but I forgot to mention Help for Heroes and the expedition website. Such a professional!

Next was sorting kit a final time and breakfast. Off I went down to the jetty, all positive and raring to go. Had a coffee from the butty van whilst also doing a phone interview for Ian McIver's blog.

Just as the BBC turned up from Stornoway, the Anguses (both the skipper and the relief skipper are called Angus) started to look unhappy. I recorded an interview for BBC Alba with the boat Orca 3 in the background, which I am reliably informed went out at 8pm tonight, and once finished Angus C (as opposed to Angus S) took me aside to say that there was oil in the engine coolant water - not a good thing.

After much humming and hawing a call was made to the engine manufacturer, who apparently knew what the issue was straight away as it has happened a couple of times before! Now bearing in mind that Orca 3 is about 1 month old, you'd have thought they'd have fixed the issue before launch.

Anyway, a part has been sent from Glasgow to Uig on Skye, and the Angii have taken the boat over on one engine. It should take a couple of hours to fix and then an hour back here on two engines. Hopefully that means that we still get away tonight, and missing the slight detour to St Kilda, going direct to Rockall we should still be there within a few hours of our original planned arrival time.

This has all meant yet more waiting around on Harris. Myself, Pennie from the Beeb, Nick and Mike from The Sun, and Bob from www.rp-alba.com headed back to North Harris to see Golden Eagles. Yet again disappointment, no eagles after half an hour's walk into the hide. Its a good job that the visitors' book isn't at the start of the walk as no-one would go out there; it appears that there's never any eagles to be seen.

Back a Leverburgh, there's no Orca 3, which for once is a good thing. Dinner at The Anchorage (again) and then to the bunkhouse to hang about and wait some more. After a few hours sleep, still no further news, so now its off to bed in case of an early wake up call.

Today has been another day of waiting...

I managed to get a decent night's sleep at Lickisto, catching up on the lack of sleep on the previous night.

A nice slow morning followed, heading north via a descent cup of coffee in Tarbert, and popped into Abhainn Dearg to see Marko Tayburn to thank him for the cask and to pick up some Dutch courage. I also managed to passed on the expedition details to a whisky club who were visiting from Kent, hopefully they'll sponsor me for H4H.

I then headed to Calanais to see the standing stones, this time in the sun (it was raining horizontally when the wife and I were here last year), and randomly got a message from The Scottish Sun that they needed urgent pictures for tomorrow's paper. So there I was in front of an ancient monument wrapped in several different flags, and in various provocative poses!

Heading back south, I popped in to see my friend Ann's parents at Luskentyre, and having passed the only policeman heading north on my way south, I said yes to a pint and sat putting the world to rights with an awesome view over the sands to Taransay.

Finally making it back to Leverburgh and the Am Bothan bunkhouse, I got reception on the phone and a whole pile of emails and texts. It seems that things have snow-balled, and if you listen to BBC Radio Scotland around 0830 tomorrow I'll be giving a live interview. It'll be my first live one, so watch out for the stumbling and mumbling.

Rumour has it we'll be departing for St Kilda at midday, prior to which I'll also be giving an interview for BBC news which I assume will also be shown on the TV tomorrow. We'll then spend some time at the archipelago before heading out to Rockall overnight, arriving first thing Friday morning.

And then the fun begins...
Nick Hancock FRGS
www.RockallSolo.com
The Rockall Jubilee Expedition 2012
Posted by Nick at 22:47 No comments:

Well I managed to get Uig on Skye eventually, arrived at 0130hrs having spent way too long with my engine switched off on the motorway about 5 miles from home, waiting for the Forth Road Bridge to reopen after a hydraulic fluid spillage. Apparently they had to lay and take up cones, which takes an hour each way, and conduct skid tests before it could reopen. The latter just sounds like an excuse to have some fun to me!

I arrived in Uig to light skies and a cloud of midges. Quietly pitched my tent to save disturbing the other campers, and got a fitful night's sleep as I was still wired on Red Bull from the drive (other energy drinks are available).

Rose early this morning to get in the shower before the crowds, went for a stroll around Uig, which took 5 minutes, so did that a couple of times, and generally hung out until the ferry came.

We departed early and I tucked into a full breakfast whilst trying to hide at a corner table as I was concurrently pinching power for my phone which had died over night.

I was met off the ferry at Tarbert by Ian from www.abhainndearg.co.uk who have kindly provided me with a cask to take to and hopefully up Rockall. It will be filled on my return, aged, then auctioned off in support of Help for Heroes.

Then I've really spent the day doing a few touristy things, killing time until departure, which will probably be Thursday now, and just driving about being amazed yet again at how stunning the Outer Hebrides are; everyone should come here at least once, and I know the weather's not often this great, but I know from experience that it's stunning in the rain too!

This evening I headed down to Leverburgh to meet up with a couple of the guys who are heading out to Rockall to report on the expedition for The Sun and Bob from www.rp-alba.com. I had a great cod and chips and a pint of something dark, and now am back at my tent in Lickisto to catch up on some sleep although its still broad day light at 2230hrs!

One week and counting...

The count down begins today! Hopefully this time next week I'll be on Harris making final kit checks and loading gear onto Atlantic Marine Services'  boat Orca III in preparation for a departure from Leverburgh the next day. Its all still very much weather dependant (the one thing I can't control) but hopefully this week of good weather we're having will allow the seas to settle, and then next week will be reasonable enough for us to head out to Rockall.

Over the past week or so final bits of equipment have been arriving, including a brilliant dry suit from Safequip who have only become involved in the last month, but have been more than genereous with their help, advice and more importantly supplies of gear. This has finally allowed me to try on all my 'assault' equipment at once to check that it is all compatable and that I can use and reach everything that I may need during the landing attempt.

I'm now at the point where I'm having a massive kit explosion all over the living room at home, which is annoying my wife but the dog seems to like it! Having packed once, I'm sure I'll be repacking several times over the next few days in order to double check that my kit is in the the correct bags and in the right order that I'm going to need it.

During the expedition, I will be Tweeting regularly, thanks to RP Alba Ltd, which will feed through to this Blog, the Facebook page and the expedition website, where you will also be able to click through to a chart showing the current position of Orca III.

There's also still time to sponsor me for this trip in support of Help for Heroes if you have some spare cash. 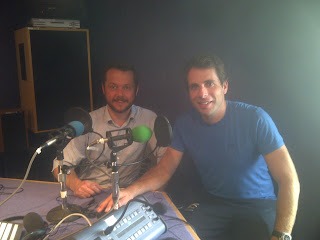 Only three weeks to go and I'll have been in Harris and will hopefully be well on my way to Rockall, if not already landed - it all depends on the weather.

I met with Mark Beaumont this week at BBC Radio Scotland to have a chat about the expedition and to get some advice about obtaining funding and coping with isolation. Our conversation was recorded and will form part of a programme on the expedition to be broadcast at 4pm on Monday 4th June.

Also, I'm really please to have received a Rescue Pro PFD (Personal Flotation Device) today from www.safequip.co.uk . They threw in lots of extra safety features, which my wife is very pleased about (as am I)! Its amazingly buoyant yet really comfortable and gives an uninhibited range of movement which makes the jacket ideal for landing and climbing up Rockall. Thanks to team at Safequip for all their help.
Posted by Nick at 19:52 No comments: