Unfortunately, as half-suspected, I have not been able to agree funding to date. My current yacht charter requires confirmation by the end of this month and it being unlikely that any monies will appear between now and the New Year, I have had to relinquish my booking. This is not to say that the expedition will not be going ahead, it is only postponed and just means that not only do I still need now to find the money, I will have to secure another boat too!

I'd like to thank everyone for their help and support so far, and hope to be back on the blog with some better news in the near future.

Well, I have to confirm the yacht charter by the end of this month, which I cannot do without funding in place: its not looking hopeful. Without transportation there's obviously no going to Rockall.
I realised at the start of all this that a major part of this challenge was going to be raising the money required to pay for equipment and transportation, but I hadn't quite realised how hard it would be. As an unknown entity, companies are unsurprisingly reluctant to promise equipment or clothing to me without some guarantee that the expedition is going ahead and that they will get some major PR out of the exercise.
Similarly, I have spoken with and also met several TV production companies who have expressed serious interest in making a documentary/film of the expedition. They cannot do this without a TV channel on board to purchase the film, and they can not get a commitment from them without a guarantee that I'm going.
Potential funders won't consider promising cash without a tangible PR return, which I can not guarantee until the expedition is booked and paid for, and so we go full circle!
So, where does that leave me? Hoping for someone to bite the bullet and commit to paying for me to undertake one of the most risky expeditions around, both in terms of risk to myself, but also because of the risks associated with actually getting there and landing on Rockall.
Is anyone mad enough in these tough financial times?
Posted by Nick at 18:40 No comments:

The beginning of the end?

Hopefully not, but I have decided to put the charity sponsorship page for the expedition on hold as I don't seem to be getting anywhere very quickly with raising funds for Rockall 2011.

I've now sent our hundreds of letters and emails with the expedition brochure and recieved very few responses in return, all of which were negative!

I suspect that the idea of giving someone money to sit on a rock in the middle of nowehere is quite hard to explain to a marketing committee - I just need one person to get it though.

The economy is obviously not helping, and I know that other people in my position are also struggling to get/losing funding for expeditions.

Any ideas gratefully recieved...
Posted by Nick at 12:09 2 comments:

There have been a number of claims to Rockall over the years. I'm not a political person but it erks me when misinformation is spread, such as the need to re-assert Britain's claim under the 1972 Rockall Act.

As reported in the Irish Times in May 2010, the Irish Minister for Foreign Affairs Micheal Martin has confirmed that "...there is no dispute between Ireland and Britain over Rockall". Ireland is [however] pursuing a disputed seabed claim to the Hatton-Rockall area, but Irish legal opinion suggests that jurisdiction over the rock does not confer any advantage. 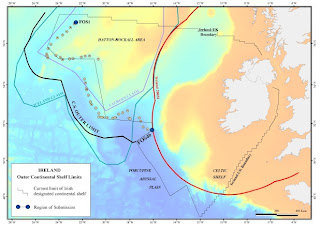 To further prove the point, here's a map taken from Ireland's submission to the UN Commission on the Limits of the Continental Shelf. The Rockall area is clear as an orange blob well within the UK boundary.

If you read any other websites or information on Rockall you'll note that there has been some dispute over whether the first landing by Basil Hall from HMS Endymion was in 1810 or 1811. This obviously has some impact on whether 2011 is the relevant year in which to have a 200th anniversary landing! I thought it prudent to clarify the position through a quote from James Fisher's book Rockall, which is the most completely researched narrative available:

"After the Rockall landing of 1955...I made routine checks at Public Records Office of the logs of H.M.S. Endymion. We discovered, to our surprise, that the famous first landing on Rockall by Basil Hall and other members of the company of...Endymion had taken place not on 8 July 1810, as was generally supposed, but on Sunday, 8 September 1811.

This curious mistake, which has been almost universally quoted in the literature, springs without doubt from Purdy's Memoir, which was regarded as the authoritative 'pilot' of the day. It is just as well we checked the log."

As Fisher was a respected scientist, had no reason to benefit from ascertaining the actual date of the landing as 1811, and appears to be the only person who has undertaken the required research of the logs, I am inclined to agree with his conclusion.
Posted by Nick at 08:47 No comments:

Things are moving along, albeit slowly. I've had last year's quote for the yacht charter confirmed. I was hoping that it would have come down a little, but no such luck! The skipper has kindly said that he will make deductions on various bases which may help out. In addition, if I can get the press coverage I'm hoping for then some berths may be taken by journalists which would help out with the costs.

I am in the process of finalising my food list with the supplier, which is interesting as I have decided what I'll want to eat for two months in a year's time!. I hope my tastes don't suddenly change. They initially quoted for 6,500 calories per day, being more used to polar expeditions. Once I'd reminded them that I'll only have a few square metres in which to move around it was suddenly reduced to 2,500 calories.

Also, following some recent press on another person's (now cancelled) attempt to land on Rockall this year, I have resurrected my dialogue with The Telegraph who have said that they would probably cover the expedition story in some shape or form.

Finally, I'm just awaiting revised costing for the construction of the RockPod and then I can start approaching potential financial sponsors. To this end, my good friend Damian has kindly produced an expedition brochure outlining the aims and with a brief biography of me. Please feel free to follow the link and distribute the brochure to anyone you feel may be able to help, as I suspect that raising the circa £30k required is going to be one of the toughest aspects of the whole expedition!
Posted by Nick at 14:01 No comments: 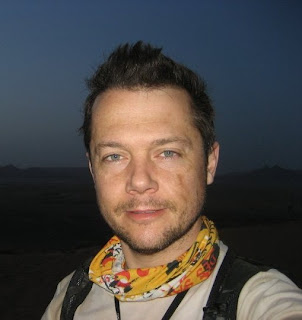 Well, things have finally settled down after the Marathon des Sable and moving house and I can concentrate on the expedition once again.

I have recently been back in contact both with Norco, who have kindly said they can produce the RockPod, and the skipper of the yacht I hope to charter, to ask them to review their earlier quotes. This is so that I can attempt to finalise expedition costs prior to approaching potential corporate sponsors. These two items are the most costly of the expedition. In addition, I am awaiting a finalised quote for the expedition food.

I have also received a draft expedition 'brochure' from Charterhouse which outlines the expedition's aims and the potential for media interest. We are currently editing this document prior to printing and sending it out to potential sponsors.

There have this week been some minor amendments to the website, and I have received some updated information regarding the Rockall timeline which I will add in due course. Also, I have finally received the 3D model of Rockall based on the RGS map from Gilberts, for which I am very grateful. It will be extremely useful when presenting to potential sponsors in order to demonstrate the extreme environment I will be living in for 2 months.

Finally, and very interestingly, I was today contacted out of the blue by a well-known TV production company who are interested in making a documentary of the expedition. It's very early days but does indicate the potential interest that's out there.