It was always going to be about the weather.

We had to think long and hard whether the window we had to get me and all my kit out to and then onto Rockall would be big enough. We knew that the swell may also be a deciding factor, and in the end it was.

Having arrived on site, in the dark, at around 0100hrs, after leaving Leverburgh on Harris at 1130 the previous morning, we circled for a couple of hours, waiting for first light. Orca 3 moved in close to the rock as dawn broke, to check conditions: there were more sea birds on the Hall's Ledge and scattered around the summit than last year, but there appeared to be less guano.

However, the striking factor was the swell; hitting Rockall from the West, exactly where you don't want it to. There is a small step in the cliff on the Western flank which is the landing 'platform', and the point from where you would commence the fast vertical scramble to safety out of the swell zone, before traversing across the western face and back to reach the summit; but not today!

The swell ebbed and flowed in waves, hitting exactly the point where I would have to jump, hurtling three or four metres up the side of the rock, well above the usual safety mark, and then plunging four or five metres into a deep hole below the step. This created a potential fall, before being able to reach safety, of almost ten metres onto the skirt of rock around the base of Rockall, and a hole into which a RIB, its crew and any kit on board would be sucked, flipped and then scraped back up the rock face.

Last year I remember looking at the landing point and being overwhelmingly confident of making the jump and clambering to safety. Today was different; the combination of such a short time to reach safety, which would mean climbing to a higher point up the face in a shorter time, and then the exposure as the sea fell away below, just did not feel right. Angus Smith, the skipper, took me aside and made it clear that he was not happy about me leaving the Orca to attempt a landing in these conditions, nor was he keen to endanger his crew on the RIBs. In the end, he took the inevitable decision out of my hands.

Like a mountain summit, Rockall will be there another day. Its obviously difficult to turn my back on the rock, and to be sailing away, running before the weather, but I'm confident that it was the correct decision today. With time on my hands during the return journey to Harris, I've watched back the footage and looked at the pictures taken whilst we were there and they all reaffirm that today was not the day.

Now its time to take stock, thank my sponsors; LPG Exceptional Energy, Calor, Kukri, and Petrostrat, my employer DM Hall, and all the companies who have kindly donated or loaned kit and equipment for the expedition; and think how to move forward. I'd also like to thank everyone involved up to this point, including The Guardian, for their hard work and support for a personal project that has been a part of my life for the past four years. This was a solo attempt, but I couldn't have got to this point without the help of a huge number of people.

As I'm being asked increasingly about the construction of my RockPod shelter, I thought I would write a blog update describing how it was 'designed' and built: 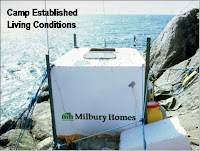 The idea for a rigid shelter rather than a tent or something similar was made at an early stage of the process and was dictated by the weather conditions on Rockall, and also by using the experience of the previous parties who have stayed on the Rockall for any length of time, Tom McLean and Geenpeace. Tom used a home made plywood box (left) tied down with nylon rope, and Greenpeace used a bespoke Kevlar reinforced fibre-glass pod (below), which I understand they had previously used on various protests around the world.

My budget didn't spread to the equivalent of Greenpeace's pod, I couldn't borrow it as it had been crushed by the Norwegian government, and anyway I also couldn't afford a helicopter to lift it on to Rockall. I also wanted something more substantial and stronger than a plywood box! 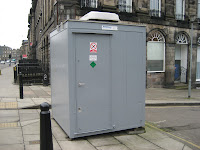 A friend of mine is an architect, and he kindly put some drawings together based on a smaller version of the Greenpeace pod. I had this costed up by a couple of specialist companies, including one that made the pod for under the Breitling round the world balloon, and who do work for NASA. Even just paying for materials, it was still too expensive, so I started hunting for a suitable object to modify. Secretly I was quite pleased, as I liked the idea of an eccentric, 'Heath Robinson', home made shelter, rather than a hyper professional super-technical one. 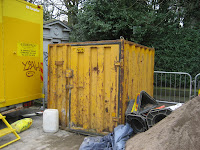 Having considered and rejected various options (examples above and right), I finally came across a water bowser in London on my way home from the Marathon des Sables (below left). It took  while to track down the manufacturer as most of the hire firms were somewhat reticent about telling me where they sourced them from.
Finally, I managed to contact Trailer Engineering, who had a proto-type of  new design (below right) which they said I could have for free if I collected it from Birmingham, which I duly did. 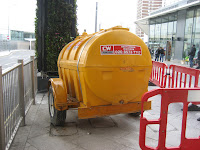 Once the new bowser was home, I had to go about converting it to its new use. I had already agreed with Lewmar that they would supply the marine hatches I would need. I had previously decided on a square access hatch, but as luck would have it, their largest round access hatch matched exactly the moulding on the top of the bowser so I ordered that instead. The side hatch, which is not strictly necessary but means that I will not be stuck looking at the sky it I get pod-bound for a few days, is designed for a flat surface with a tolerance of just a couple of millimetres. This created difficulties fitting it to the curved wall of the pod, and meant that I had to cut a recess into the wall and remould the plastic around the hatch, using the off cuts and a heat gun. 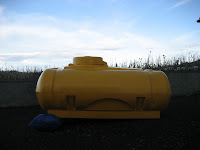 The hatches are fixed with stainless steel bolts, and have both a neoprene gasket and marine grade silicone sealant around then to keep the water out. Similarly, the openings for its previous incarnation have been sealed with silicone. I also installed a deck vent, for those times when the weather doesn't allow me to open the hatches for ventilation, and a target level to help level the pod once on Rockall.

Next job was to attach the fixing points to the side and top of the RockPod, from which ratchet straps (the system used and proved by Greenpeace on Rockall, and provided by Safety Lifting Gear) will attach to fixing points on the rock left in place by Greenpeace. As part of my recce trip last year, I inspected the condition of these fixings, and they look like new and are all still well fixed in place. I will of course be taking back-ups in case any come loose during my stay. The fixing points were supplied by William Hacket Chains, and again were bolted on with stainless steel bolts and backplates, with silicone sealant to fill any gaps. I have put a number of self-adhesive grip pads around the 'deck' of the pod to assist climbing and moving about on it, as the surface is shiny and very slippy when wet. 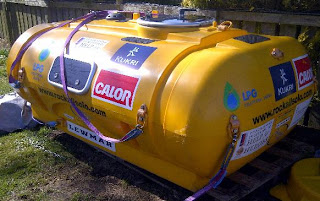 Internally, I have fitted a plastic floor to level the convex moulded base, supported at the edge with off-cuts of plastic pipe and insulated below with expanding foam and reflective foil. The walls and 'ceiling' were insulated with spray-on foam by Foamspray Techologies, and this will be sealed with a rubberised paint to provide a cleanable surface. Externally, and following the first round of winch testing, I have adapted the original 'design' by filling the concave base with more expanding foam and fitting a plywood baseplate, as previously the shape caught on rocks as it was being winched. In addition, I have fitted two additional lifting point, much lower down on the RockPod, specifically for winching it up Rockall and as a result of issues encountered during testing
The end result is a strong, rigid, waterproof, but relatively light weight shelter (circa 150kg) which floats, and although Spartan inside, will, I am confident, protect me from everything the summer Atlantic can throw at me.
Posted by Nick at 10:13 2 comments: