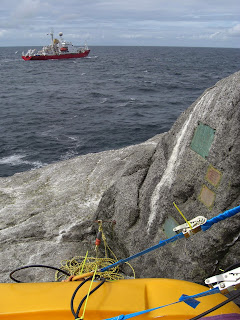 I've been waking up earlier in the mornings since the storm, and this morning was no different. However, the sea was probably the calmest its been since I got here, in stark contrast to events just over a week ago. There was no wind at all, no waves, and a very slight swell. Today infact was one of the days that Kilda Cruises initially proposed to come and get me off the rock after the storm; we would have had perfect conditions for it this morning. As it is, they will be coming next week at some point, although they are awaiting the week's forecast on Sunday before making a decision as to which day.

The solo record of forty days is on Monday, so I will have beaten it on Tuesday. Similarly the group and longest record is on Wednesday, so I will have beaten it on Thursday. At the moment, the forecast for Wednesday is not great, so I'm speculating that I will be coming off on Thursday or Friday, having completed the main goals of the expedition: beating the two occupation records (although not by very much) and raising money for Help for Heroes (almost £7,000 as I write this), which is great. My sixty day target was always an arbitrary figure I had just on, with no real significance, as it was a nice round figure and represented two months here. It would have been nice to push the records out that far, but I'm not too disappointed that I won't be here for another couple of weeks. Yesterday, strangely, I did get a feeling of disappointment at the prospect of leaving soon. I think that this is partly because I've had to cut the trip down due to the loss of supplies, fitting in with weather windows and with boat availability, but I also think is more because I had wanted to record as much about Rockall, whilst I had this opportunity, as possible. The loss of my climbing hardware, along with the knock that my confidence has taken, has restricted me to the upper levels of the rock, whereas I had hoped to go down almost to sea level, on ropes, on calm days like today.

I've had a couple of lovely days of weather since the storm, and the wind has been mainly from the West and North West, until today, so that when it has been higher I have been sheltered on the South face. This has all combined, along with me getting out and about again, to settle my nerves, and I'm now much happier and enjoying being here again. My recent explorations have revealed that the rock has been scrubbed clean by the storm: guano stains have been removed from the light housing on the summit which is now partially filled with water and floating guillemot eggs, the 'patio' and 'ramp' sections of Hall's Ledge are completely clean, and a gannet nest with egg that was in a cleft above me near the summit has gone completely!

There are again a couple of trawlers about, but nowhere near as many as before. However, a couple of days ago I was visited by the research vessel 'James Clark Ross', registered in the Falklands. They were enroute from Canada to Iceland, and when I pointed out, over the VHF, that Rockall wasn't on that route, they told me that they were doing a bit of research here too, about a mile away, heading North, and would be back again in a few days. Once they had finished whatever it was they were recording they came back past the rock, within probably two hundred metres, close enough for me to shout to them, and see over thirty people taking photos of me and waving. It was a big ship, the biggest since I got here, and having it so close was amazing. The photo is of them heading North after passing by.

Also over the past few days, I started and have now completed a geomagnetism survey for St. Andrew's University. Again, I had hoped initially to go far and wide over the rock to complete this, but restricted as I now am, I confined myself to the extended area of Hall's Ledge. I was pleased, though, that I was still able to record eleven transects. I'm not sure how much use the data will be, but they have said that anything I can record will be "interesting"! I have also been collecting a number of rock samples for them as I go, which I have attempted to record the orientation of in situ so that they can reproduce that orientation in the lab, which has been also been fun and perhaps more importantly, time consuming. It occurred to me yesterday that I could also use the grid I had effectively created with the transects to map out Hall's Ledge fairly accurately, so I have been doing that this morning too.

Aside from all that, I have been reading a lot, and am now enjoying the autobiography of Malcolm X. One of the issues with reading so much in a cramped pod is that I am obviously resting on the same points on my body all the time, which means that I have started to develop a sore patch near the base of my spine. If I sit up to read then the top of my back quickly starts to ache from being hunched over! I've also developed a twitch under my eye. I don't know why, but it is annoying at times! Whilst reading I have seen a number of kittiwakes with brown clumpy stains on their tails, backs, and wings. I'm assuming that this must be oil or something similar they have picked up locally which is a real shame. The first one I saw a few days ago now seems to be cleaning up slowly, and they all seem to be able to fly still.

My thoughts are now turning to coming off the rock and how I now go about this with less barrels for kit and no climbing hardware. The remaining barrels of kit won't be an issue to lower down to the boat, but I had planned to use a Petzl ID to lower the RockPod off the cliff, the way it came up. Now that I don't have that piece of equipment, I need to find an alternative. The back-stop option is just to push the pod off the rock and hope for the best; although I think the pod will survive the fall, the shock of hitting the water may crack the hatches, and if the pod were then to roll, it would fill with water and be lost. I'd prefer to take it home, one so that its not a danger to shipping and two as it's the most iconic item associated with the expedition. Having emailed the guys at Summit Rescue who know the pod well, having winched and lowered it up and down the crag at Ratho with me in training many times, they have recommended a 'Super Munter Hitch' which I will be practicing with over the next few days. There is also an option to slide the pod down a slope at the side of the ledge with a smaller drop at the end, so that may be the way forward.

Please forward all Press and Media enquiries regarding the expedition to Iain MacIver
Tel: 0845 860 2411
Email: rockall2014@promessage.com
Posted by Nick at 18:03

Nick,
I admire your efforts hugely. It won't come up on the justgiving page but I will send Help for Heroes a £50 Charities Aid Foundation (CAF) cheque as sponsorship. Best wishes and good luck, Edward Woods

Flipping heck Nick! Hang in there, but not literally!