Final blog from the rock 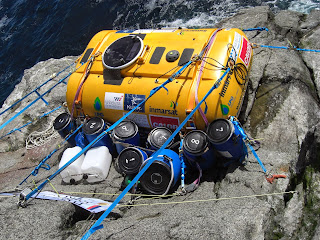 On Sunday I had some poor weather, coming from the south as it was meant that I had no shelter from the wind, nor the bands of rain and mist that came through all day. As usual, when this happens, this resulted in a generally pod bound day reading. I in fact read most of Bill Bryson's 'Travels in Europe' in between exercises with my Thera-band when it was dry enough to stand up in the pod. Fortunately, the wind had peaked in the night, I'd slept through it, and the wind slowly decreased throughout the day. The gannets returned in numbers, and have taken to landing on 'the patio' area at the west end of the ledge when they are not diving for fish below me. When they did land, I spoke to them firmly, pointing out that they would soon have the rock to themselves again, if they could just be patient.

There have been only three trawlers about this week, including K373 'Aalskere' and K121 'Keila', and my friend the oily kittiwake, whom I have imaginatively called 'Kitti' has been resting a lot on the ledge, even allowing me to get within a metre or so of him. He can still fly, and seems to be slowly cleaning up, but is obviously not quite right. As I have had to pack up the wind turbine a couple of days before I leave, I have been charging and discharging a couple of pieces of kit that I have not used much in order to try and get the batteries to hold their charge for long enough to reach the end of the expedition.

On Monday, I set up and started the second of my two Leica GNSS surveys, the data from which will be cross referenced with the first survey, now that the satellites are in a different position, in order to calculate the exact position and height of Rockall more accurately. In addition, I used the time I was out of the RockPod to collect a few more orientated rock samples for St. Andrew's University, and also made an attempt at drawing the back wall above Hall's Ledge and its main features for future reference. In the afternoon, the 'James Clark Ross' reappeared having been up to Iceland, and came close again, taking more photos and some video of me as they passed. They were here for over half and hour, we chatted on the VHF, then they headed home to Scotland.

Tuesday was a good but quiet day, despite the wind being from the south all day as it was low and there was no rain. Small blessings! In addition, it was a new solo occupation record for Rockall, and a day that I had been planning for and thinking about for over five years. My first job for the day was taking down and packing away the Leica GNSS receiver and backing up the data it had collected in the past twenty four hours. Apart from that, not much happened. I watched the gannets diving, and the minke passing. There have been three trawlers at the rock this week, and I went onto the lee North side of the rock and watched them, out of the incessant wind, for while.

Yesterday was the first day of packing up and preparing to leave proper. The forecast was for low winds. As I wasn't going to generate very much power anyway I planned to dismantle the wind turbine. Having done this before at home to practice, I though it would take me most of the day, if I worked slowly. In fact, even at a slow pace, I had it down and packed away in around two hours. The turbine head had come onto Rockall in a large barrel to protect it, but as I lost one of these I'm hoping a dry bag will be sufficient for getting it off. In addition, I've put the charge controller into a barrel, it came on inside the RockPod, as I may have to drop the pod off the rock and I don't think the controller would survive the shock of hitting the water. Having taken it down, it was amazing how much space there appeared to be on the summit, and I spent some of the afternoon enjoying walking about on a flat surface for the first time in weeks, albeit not very far! At the end of the day, I checked my emails to discover that my departure date has been pushed back 24 hours. This I think is due to the wind direction, which will be behind the boat when they leave Leverburgh on Friday evening, dropping to next to nothing when they arrive at Rockall, and turning round to be behind them on the way home too. Another day here means another day onto my new occupation record, but having taken down the turbine yesterday, may mean that I'm short on power tomorrow; hence why I'm posting this blog today rather than on my last night on the rock.

This morning I was rudely awoken at 0630 by the Woods Hole Oceanographic Institute vessel 'Knorr' over the VHF. We had a good chat; they told me that they had been laying moorings in the area and had come to Rockall specifically to see me. An added bonus, as today marks the longest anyone has ever been on Rockall, was that they set off a barrage of fireworks in my honour from their rear deck, which was amazing to see all the way out here, but probably shocked some of the fishing boats! The rest of today I've just spent reading, doing a bit of minor packing of kit, pondering about how I'd go about repairing the derelict light beacon housing on the summit, and looking out for seals and minke whales. Having complete most of the tasks I set myself before I came here, there really is now not a lot to do out here.

The photo is looking down on the RockPod from the summit plateau. I should still be able to Tweet tomorrow night, but this will be my last blog from Rockall. Thanks for following the expedition, and remember that you can still support me in aid of Help for Heroes at www.justgiving.com/rockallsolo . Once I'm onboard Kilda Cruises' boat Orca 3 on Saturday, hopefully around lunchtime, you should be able to track my return to land live here:

Please forward all Press and Media enquiries regarding the expedition to Iain MacIver
Tel: 0845 860 2411
Email: rockall2014@promessage.com
Posted by Nick at 18:15